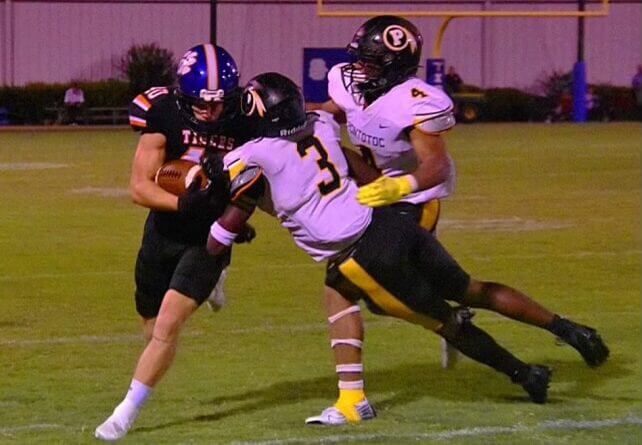 The Saltillo Tigers collected their first victory of the 2021 season with a 29-26 win over the previously undefeated Pontotoc Warriors.

The Warriors started the game off hot on offense with a 71-yard run on their first offensive play to take the early 7-0 lead and added another score to move the lead to 13-0 at the end of one.

Chance Johnson connected with E.J. Fisk on a touchdown pass early in the second to cut the lead to 13-6. The Tiger offense followed with another score on their next possession on a 40-yard field goal from Carson Langford to bring it to a four-point deficit.

Pontotoc got the second half started off right with a touchdown on their opening drive to extend their lead to 19-9.

Johnson came right back for Saltillo with his second touchdown pass to Wayne Earl Smith to cut it to 19-16 midway through the third quarter.

Phoenix Moore brought the Tigers their first lead of the contest with a early fourth-quarter score to go ahead 22-19.

That lead would be short lived, however, as Pontotoc took the ensuing kickoff to the house to retake the lead 26-22.

Johnson, as he did all night, brought his offense back down the field, capped off by a 52-yard touchdown pass to J.T. Beasley with just over a minute left to take a 29-26 lead.

Pontotoc got the ball back, but they would be stopped on fourth down in the final minute by the Tiger defense to preserve Saltillo’s first victory of the year.