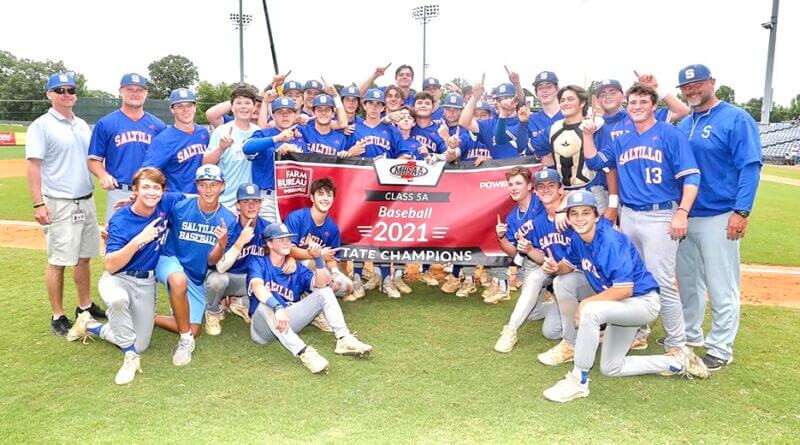 In a decisive game three in Pearl, the Saltillo Tigers notched eleven hits to lead the way in a 9-5 victory over the Pascagoula Panthers to claim the 2021 5A state championship and first title since 1972.

The Panthers started off the scoring in the top of the first inning with Keilon Parnell lead inning off the game with a triple. He later scored on a balk by Tiger starter Ian Dillon.

Saltillo responded emphatically in the second inning, however, with four runs and never lost the lead from that point.

Jake Prather brought in the first run of the game for the Tigers with a bases-loaded fielder’s choice. With two outs, pinch hitter Evan McCarthy came up big with a two-RBI single. Just after, Matthew Roncalli singled to bring home McCarthy to cap off the four-run inning.

However, Pascagoula refused to go down easy, out scoring the Tigers 4-1 over the next two innings to bring the score tied at 5-5 after three and a half innings.

Like a heavyweight fight, Saltillo once again answered the call to respond.

Three runs came across in the bottom of the fourth for the Tigers, led by a throwing error, sacrifice fly, and a Luke Wood RBI single.

From that point on, Drake Douglas dominated the Panthers on the mound while not allowing another run to cross. In the sixth, Ben Webb just added more insurance with a pinch hit RBI single.

Back out in the seventh to close out the game, Douglas had no issue slamming the door shut to polish off Saltillo’s backend sweep and secure the Tigers the 5A title.

In the win, Roncalli and Nolan Wright led the way with two hits each. Evan McCarthy’s pinch hit allowed him to lead the squad with two RBIs.

Douglas in his four innings of relief did not allow a single hit or walk.