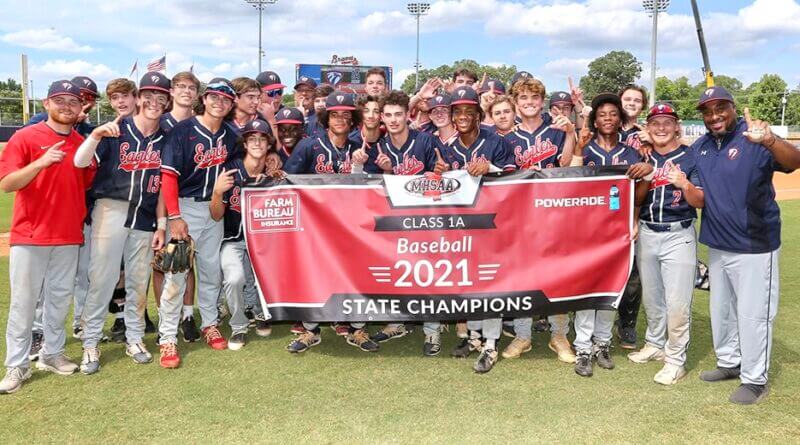 Timely hitting and a superb performance on the mound by Noah Foster were the catalysts in the 4-0 win by TCPS over Resurrection Christian to deliver the Eagles their second baseball state championship in program history.

The game started off with offense at a premium as neither team could manage a run in the opening two innings. Resurrection put a runner in scoring position in both innings, but Foster slammed the door shut on both opportunities.

In the top of the third inning, the Eagles found a way to strike first as Foster scored one on a fielder’s choice, and another came around to score after a throwing error occurred on the same play.

After taking the 2-0 lead, Foster was completely dialed in the rest of the way. He ended five of the seven innings with strikeouts and never allowed Resurrection to get in a groove offensively.

Needing insurance runs in the top of the seventh, Foster delivered yet again, but it was at the place in this instance.

Foster brought two home with an two out, two-RBI single to stretch the lead to 4-0 before the bottom of the seventh.

In the bottom of the inning, Foster finished off his complete game effort decisively, forcing a fly out to right field to secure the final out and bring the 1A state championship back to Belden.

Coach Drew Dillard talked about Foster’s outstanding game on the mound after the win.

“He [Foster] definitely gave us a chance to win. I’m not even sure how many he walked, but he threw some good pitcher’s pitches, and he kept us in the game until we could finally scratch a few more runs on the board, which is always great.”

Foster threw a complete game, allowing eight hits with no runs and eight strikeouts. Foster also only walked two in the ballgame.

Jon Paul Yates and Colin Oswalt led the squad offensively with two hits each. Meanwhile, Foster was responsible for all four runs batted in.