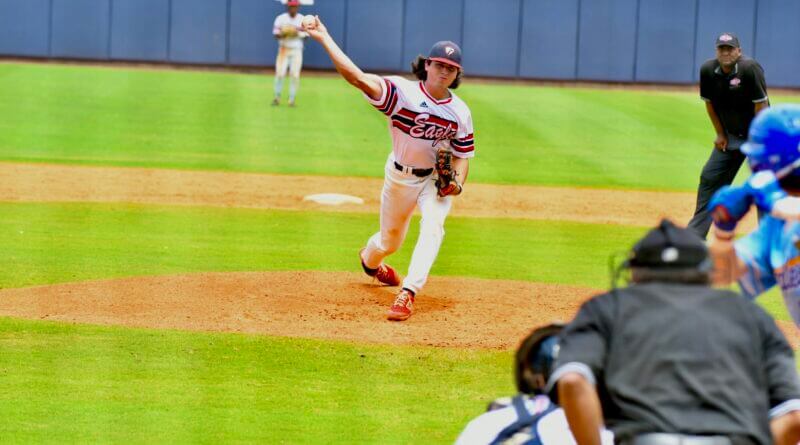 The Eagles now stand just one victory away from championship glory as TCPS defeated Resurrection Christian 5-2 in the opening game of the 1A series on Tuesday.

Khi Holiday got the offense going for the Eagles with a leadoff single in the top of the first. He eventually scored on a throwing error, and Noah Foster added a RBI triple in the inning as well.

Daniel Reddout, who started the game on the mound and secured the win for the Eagles, topped off the hot start with an RBI single to give his squad a 3-0 lead they never relinquished.

Cole Tingle, who started the game pitching for Resurrection, and Reddout battled back-and-forth through the next two innings.

However, the opposing Eagles found their way on the board in the top of the third inning with a run scored on a wild pitch. However, Reddout also maneuvered out of a jam in the inning and left two in scoring position.

In the fourth inning, Resurrection struck again when Tingle won a plate battle between pitchers to notch himself an RBI single.

From there, it seemed to be a defensive battle as neither squad could break through in the fifth.

However, TCPS found ways to add insurance runs with two errors being committed by Resurrection and Kenyon Fleener coming up big with an RBI single to extend the lead back out to three runs.

With the 5-2 cushion, Cooper Davis came in and slammed the door shut with a three-up, three-down inning to secure the save and deliver the game one win for his Eagles.

In the win, Foster led the way for TCPS with three hits in three at-bats. Reddout and Jon Paul Yates backed him up with two hits each.

Game two is set to be played on Thursday with a 1 p.m. first pitch.