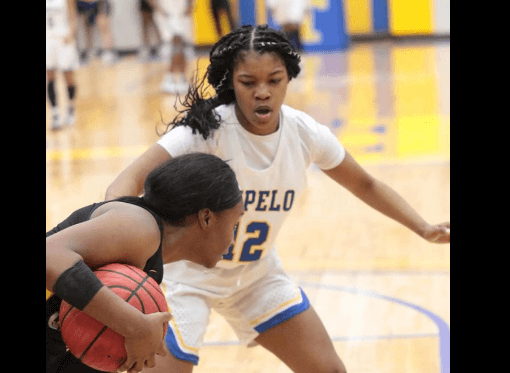 The Lady Wave of Tupelo were looking for their second win in a row over a top ranked team in Mississippi after Saturdays win over Choctaw Central and they had a well drawn out gameplan against Olive Branch from the tip on Tuesday to achieve their goal: be tenacious on defense and create early offense.

Tupelo jumped out to a 12-0 lead in the first quarter en route to leading 22-7 after the first quarter behind Che’Mya Carouthers 9 points. They never trailed in the contest and went on to take a 62-56 victory.

On top of Carouthers 9 first half points on a trio of opening quarter three pointers, Tupelo got 7 three-pointers including a pair from Kenzie Sharp. Sharp ended the first half with 9 points. Halle Traylor and Mikayla Riley also connected on first half three pointers to give the Lady Wave a 36-20 halftime advantage.

After building their lead to 22 early in the third quarter, the Lady Conquistadors battled back the rest of the 2nd half, pulling the game to within 7 points with under 3 minutes to play in the ball game.

The Lady Wave connected on 7 free throws from that point forward to ice the game and claim the big victory.

Carouthers and Sharp each ended with 14 points. Traylor added 12 while Ripley had 10 in a balanced scoring effort.