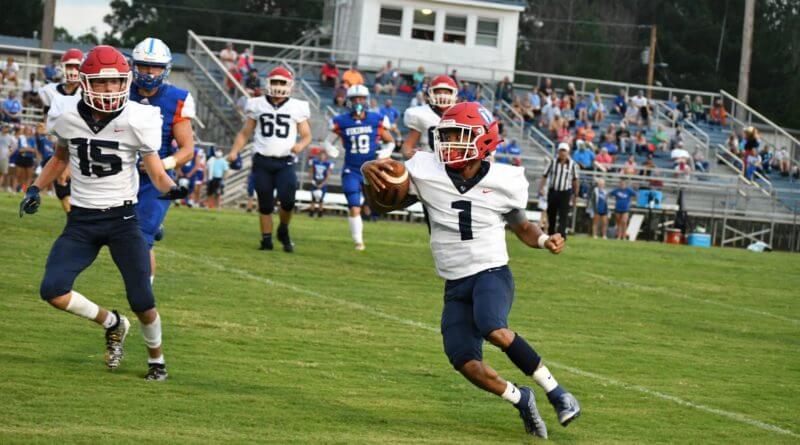 The season opening scrimmage between the Vikings of North Pontotoc and the Eagles of Tupelo Christian was called early due to inclement weather, the remnants of Hurricana Laura which had made it’s way into North Mississippi, causing the vast majority of Friday night jamborees to cancel.

The lightning wasn’t the only thing lighting up the field in Ecru.

The dynamic duo of Khi Holiday and Noah Foster, who connected on 19 touchdowns a season ago, were back on the field and back in the endzone on Friday.

The first touchdown pass of the contest came on a back corner fade that Foster nabbed before tumbling out of bounds. The receiver got up and rushed towards his quarterback for a mid air embrace.

The second touchdown was a well executed zag route, where Foster feigned an inside release before breaking out for an open touchdown.

With the return of the majority of the aerial production from a season ago, including talented receiver John Avery Herrod to go along with Foster and Holiday, look for the Eagles to score points in bunches again this season.

The Eagles are in regular season action next Friday night on the road againt Biggersville. Look for more pictures from the scrimmage against North Pontotoc on the Lee County Sports Facebook page.